The new bridge across the estuary has re-opened.  And being our northern-hemisphere season of gloom, I first crossed it in darkness.

I should explain.  This new bridge was once a railway bridge, and has now been resurrected for cyclists and pedestrians.  It’s just north of Laira Bridge, a busy main road bridge and the lowest crossing point on the Plym estuary: both bridges were built where the estuary narrows somewhat.  The new bridge opened about six months ago in the season of daylight, but then closed a couple of months later for further works on the Eastern end.

I had thought they were extending that along course of the old railway as far as the Plymstock bypass, which would’ve saved me as a cyclist from having to move out into the right hand lane of the dual carriageway to turn right off it – in both directions.  But no, they built a new bridge across The Ride (a road), but then it goes no further: a fence blocks off the line of the track.  Before the works, access to the bridge was from The Ride.  Now, after them, access is still from The Ride.  Since The Ride is neither big nor busy, there’s no advantage to being able to come down on the far side.

Anyway, coming to it at night, I see it’s all lit up.  Not as in regular streetlights, but on the outside.  A show of coloured lights that move gradually through the spectrum like a screensaver.  There is a view from the approach, although it comes out better on camera from the Saltram side – as I discovered the following evening when I returned on foot with the ‘phone to take some snaps. 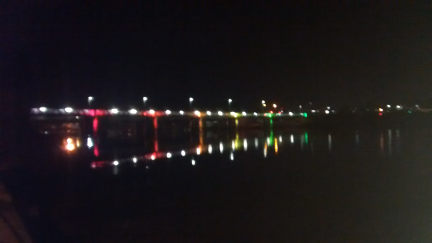 That actually looks more impressive in the picture than in real life, where viewpoints like this one are few and far between.  The best view other than from on the water (or mudflats at low tide) must be from the road bridge, where its effect is sadly lessened by traffic and street lighting.

But all those coloured lights are on the outside of the bridge, and so scarcely visible from on the bridge itself, where strips of harsh (tending to painful) white LED lights dominate.  Especially where the bridge is straight.  The ‘photos actually look rather better than the reality: