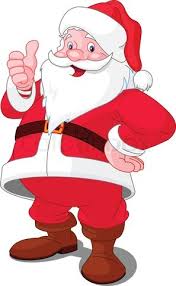 A benign image, but a darker history.

The modern image is benign: a fat jolly supernatural fellow, and the implausible giver of gifts to children.  And his mortal doppelgangers in innumerable shops and seasonal events.

But is there a historical original?  And would he be welcomed in today’s society?

The answers are a qualified Yes, and a pretty unqualified No.  The Yes comes from tracing “Santa Claus” back to “St Nicholas”, the 4th century Bishop of Myra.  It’s a somewhat-tenuous derivation that works very differently in different modern languages, and is not the only origin story: hence only a qualified Yes to the man we call St Nicholas as the original Santa.

So who was this man?

Well, for one thing, he was quite the opposite of the modern image of jollity.  He appears to have been a killjoy who saw fun as a sin and prayed earnestly while others let their hair down.  There are possible hints that he might even have prayed for divine retribution on the sinners, though that remains speculation.  Not, in character, a role model for the modern Santa.

But in one thing – the story that lends credibility to his being the origin of Santa – he was very much the role model.  He gave gifts to children.  Gifts of gold, that might be thought to sit uneasily with Christian ideas of disdain for worldly wealth.

It’s in the recipients of his generosity that the true nature of the story becomes clear.  These are girls.  They’re at the age where they rebel a bit against parental discipline, but their father keeps them on a tight reign to protect them from the Big Bad World.  In other words, young teens.  Nicholas’s gift of gold helps liberate them to have some … erm … fun.  So not an early case of “bishop and choirboys”, but rather one like the girls in this more modern story (albeit without the racial element).

Was he in fact a pimp?  I know of no strong evidence, but circumstantially it seems entirely likely.  It would account for his repeating the gift for several girls, and might’ve helped with being able to afford them!  But at the very least, he was not a man modern parents would want near their children!

I don’t know how I should describe the nonsense I pay Virgin (“Liberty Global”) good money for.  It’s supposed to be an Internet Service Provider, but it falls well short of that far too often, and sometimes for extended periods.  Back in the summer I was stranded without service for several weeks.

This morning (or, more precisely, yesterday morning) I found myself unable to read my mail.  I also couldn’t ssh to the server.  Lynx could get the front page, but only after a long delay. This looked exactly like something that happened last week, when only after rebooting (from the rackspace console) and calling rackspace support did I realise the problem was with Virgin, and traceroute was hanging on a Virgin machine after just a few hops from here[1].  Using my EE 4G connection, all was well.

Today as last week I could see the server was fine, as I could access it from an apache.org machine, but anything from home just timed out.  I let that pass, and again used the EE connection to read mail.  But after a full day of downtime I thought I’d check a little more.  This time traceroute gives me an entirely different destination: 62.252.172.241, which is a machine owned by Virgin!  A simple DNS lookup tells me the same.  So this time it’s a DNS cockup.

If it’s a DNS cockup, how come I can still browse my website (at least using Lynx, which doesn’t time out first)?  There must be a HTTP proxy – with valid DNS – on 62.252.172.241.  Smells like deliberate sabotage!  And how come this didn’t appear to affect other sites I’ve been to today?  For example, $work email (c/o gmail), or this blog @wordpress?

Probing further, this time (unlike last week) I can route to the server by IP address.  So it’s definitely just DNS.

WTF is going on?  I think it’s time to drop this sick joke of a non-ISP.  Maybe get a second 4G connection from another provider for a bit of redundancy: that connection seems good most of the time, but wifi to the 4G modem is totally flakey so I have to use it via USB, which is a poor second-best.

[1] Yeah, of course any geek should have tested that before going to rackspace.  In my defence, I was flat out in bed with a nasty lurgy and in no fit state to browse the web, let alone fix a problem on it.