A tale of two agencies

Mixed experiences with two arms of the state today.

On my list of to-dos after moving was to sign up with a quack locally.  Last week I got around to googling for GP practices in the area.  It presented them nicely on the map, and I see there’s exactly one that’s genuinely local.  Looks like an easy choice, and a neighbour speaks highly of them.

So last Thursday I went round there.  They required identity documents which I didn’t have: I offered bank/credit cards, but don’t carry anything else around.  Come back with a utility bill or similar showing my address.

OK, I can do that, and today (Thursday being my usual free day during the week) I went back, bearing gas and electricity bills and a bank statement.  Nope, not sufficient: this time they insist on photo-ID.  Buggrit, why couldn’t they have told me that before?  I’m fine with them asking for it[1], but annoyed by lack of consistency.

As it happens, my old passport expires in September, and I had sent it off just last week as supporting document in my application for a new one.  So I had no photo-ID.  Looks like I’ll have to wait.

Then early afternoon today there’s a knock at the door.  Mail delivery to sign for: it’s the new passport.  So that’s taken just one week.  OK, it’s just a renewal, and I guess I’m a straightforward case ‘cos I’m easy to recognise from the ‘photo in the old passport.  But even so, they say simple renewals should expect three weeks and allow for more.  So finally I can go and sign up for a local quack.

Full marks to the passport office for efficiency.  Bottom of the class to the NHS for vagueness and inefficiency and messing me about.  OK, not exactly critical, but it seems depressingly reminiscent of when it does matter.

[1] Though it seems perverse in a country where we aren’t required to possess any form of photo ID, and not everyone has any.

This year I have my own private supply of blackberries.  That is to say, I have brambles in the garden, with no human competition for them.  Nor indeed their customary companion, nettles.

Having today picked my second big batch of the season, I am astonished by both the quality and quantity of what I can easily get from just a few bushes.  Yes the weather has been great for them with a good mix of sunshine (the dominant theme this summer) and also a healthy amount of rain.  But I’m sure having them to myself, with the neighbourhood cats probably even reducing competition from the birds, is the main reason they’re so great.

This gives me a happy problem of excess.  Even freezing a lot of them (as I always do) I’ll have desserts to last me more than the year to next season, so I’m going to have to find other uses for them.  Two that spring to mind are giving them away and repeating the delicious chutney I made a few years ago, last time we had a really good season and I wasn’t incapacitated by that tennis elbow.

It also thrusts on me the problem of managing rampant briars.  I hadn’t realised before that they grow huge, vicious stems bearing none of the fruit.  Until recently I had removed none of the brambles except when they came to block my path/steps, as I didn’t want to deprive myself of their fruit.  This morning before picking the berries, I went out in boots and old, full-length trousers and chopped the unproductive branches ruthlessly.  That left my hands as shredded as they always are in this season, but re-opened paths at the back of the house for next time the window-cleaner comes 🙂

I’m faintly wondering whether removing vast quantities of those vicious brambles might affect next year’s crop.  But I’m reassured by having seen brambles cut back ruthlessly, yet grow back vigorously in ample time to yield another vast crop the following year.

Does the thickness of a bramble correlate with its age, so a thin (though still long) green stem is this year’s growth while the half-inch-diameter ones are several years old?  If so I’ve cleared the brambles of ages from where the fruitless ones were thickest!

The wrong kind of diversity

What does our society think of Diversity?  Of course, we want it.  In fact we insist on it, and go to sometimes-absurd lengths to enforce it.

Except, it seems, when it’s the wrong kind of diversity.  The “diversity” we enforce is, it seems, strangely selective.

Just imagine if big employers (say, Tesco and Next) refused to employ black people.  No, of course it’s unthinkable!  That’s a basic principle on which we can all agree.  Yet when those very employers employ Eastern Europeans, they’re condemned for that too.  By no less than Chris Bryant, a senior politician from the Labour Party, supposedly the champions of the Equality and Diversity agendas.

Bryant backed down with egg on his face over a bunch of basic factual errors.  But we have been warned: there’s a right and a wrong kind of diversity, perhaps to be enforced on a whim by the often-arbitrary and fickle tyranny of Political Correctness.

What can I say?

It’s customary to complain about ones own service providers.  But compared to the competition, problems with wordpress are trivial: no more than minor annoyances.  Which is not to say it’s immune to losing data, or royally fouling up writing/editing when faced with an unfamiliar platform: just that it’s comparatively stress-free.

In particular, relative to blogger, I’m happy to say wordpress just works.  Blogger’s comment system just becomes more nightmarish by the … well, almost by the day.  Here’s my latest attempt to comment on my brother’s blog: 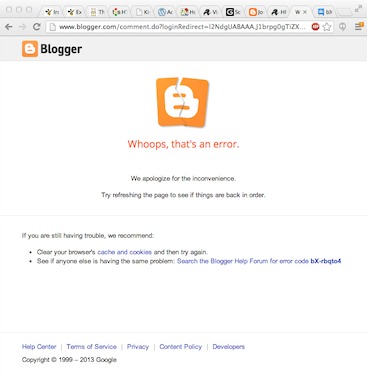 OK, so it’s an error message.  Wouldn’t be so bad if it were a one-off.  And if I hadn’t just spent longer just rotating captcha crap in search of one I can read than it takes to write this little rant.  And, most annoying of all to a geek, if the link to “Search the Blogger Help Forum” wasn’t such a cruelly misplaced come-on.  Follow the link, and this one, to see what I mean.

It seems I’m not the only one to get that error code.  Searching for it now turns up a result, saying in effect “we know it’s a bug”. Oh, and I came up against one of WordPress’s defects getting it to allow me any markup that puts the postscript reliably below the image.

They have outlawed the Truth!

With whistleblowers tackling the mighty US government, I could easily have something to say about Bradley Manning and Edward Snowden[1].  But I don’t think I really have much to add to what’s already being widely said.  Glad the latter has escaped from airport limbo: whatever his eventual fate, the Russian authorities had to do something, and I don’t envy them the choice!  A year should provide the opportunity to arrange travel to one of the Latin American countries that’s offered asylum, if the Russians allow it or turn a blind eye.  I expect he was interviewed by Russian agents: wonder what deal they may have reached?

What motivates me to post now is a couple of lower-profile cases where people have been locked up for a lot less.  No whistleblowing, just in one case expressing an opinion, and in another googling some information.  All the mainstream media (e.g. BBC) have reported this week that two jurors have been locked up for not Playing the Game according to strict Club Rules.  One juror expressed a (probably prejudiced) opinion on Facebook of a defendant, while another did a bit of research to inform himself.[2]

Is there no such thing as a prejudiced juror?  Are courtroom stories and dramas such as Rumpole always talking nonsense when they describe them?  Hardly seems likely: one might just as well ask if there’s no such thing as a human juror!  No, the first juror’s crime wasn’t his prejudice, it was the fact he expressed it in a medium that can’t reliably be hushed up.  He blew the court’s cosy game of make-believe, and went to prison for it.  His simple truth – like thousands of others, MUST remain ritually unspoken.

As for the other juror, that story is even more disturbing.  If you believe in a naïve concept of justice – the sort of thing where you get found guilty if you committed a crime and innocent if you didn’t – how could you not want to inform yourself?  Yet that’s outlawed: you are required on pain of imprisonment to limit yourself to what you can make of a story spun to you by (ideally) two career liars and control freaks, who may or may not have made the effort to inform themselves.

Have you stopped beating your wife?  Yes or No?
The barrister has years of practice; the average honest witness has little or no defence and comes across as evasive or even dishonest.

How many jurors out there are wracked with guilt for years – even a lifetime – after being suckered into reaching a verdict that, as soon as the courtroom story fades and the real world re-enters their minds, they know or suspect to be profoundly wrong?  I can see it in anyone with the kind of borderline-obsessive personality of a typical geek who gives attention to detail.  Or those with a strong enough social conscience to let it affect their lives.  Indeed, I wonder if you have to be a full-blown sociopath to do jury service without at least some risk of lasting damage to your psychological wellbeing?  That second juror should’ve taken his lead from my little rant.

[1] Anyone else feel the merest hint of Schadenfreude when the US Govt denies the description “whistleblowers”?  I guess it’s easy to think a whistleblower is a person who reveals someone else’s guilty secrets, not ones own.
[2] This is general comment on issues raised by the headlines, not on the particular cases about which I know no more than is reported in the linked story.